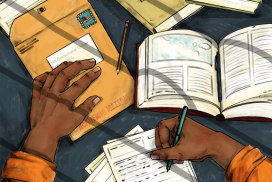 South Side Weekly talks to education projects in IL prisons to learn about how we deliver courses despite COVID.
Read More 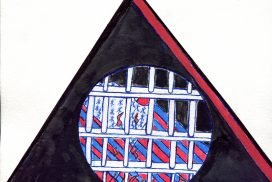 The 51st (Free) State is a project, generated at Stateville Prison, where over the last year research and discussions have centered around a nation of…
Read More

A new PNAP book project will be released titled Carving Out Rights from Inside the Prison Industrial Complex, published by Hat and Beard Press. This…
Read More 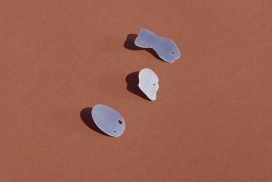 Through 2020, 25% of proceed from sales of the series yesterday, today, tomorrow will be donated to support PNAP.
Read More

From Attica to Abolition
PO Box Collective
September 15
Artwork from PNAP students and faculty as part of a collection of images curated to mark the legacy of the Attica prison uprising 49 years ago, and the contemporary movement to #FreeThemAll.

The Long Term Exhibition
O’Connor Art Gallery, Dominican University
September 4 – December 20
Programming included opening and closing receptions as well as a reading and workshop with PNAP faculty Dr. Tara Betts, a screening and discussion of the documentary Stateville Calling, and a performance of Notes on Territory with PNAP faculty Martine Whitehead and Damon Locks.

Envisioning Justice Exhibition
Sullivan Galleries, School of the Art Institute of Chicago
August 6 – October 12
This exhibition shared the work of Chicago artists and communities, including PNAP, as they visualize, actualize, and reimagine strategies, policies, and approaches in the service of a society that is just for all. Presented by Illinois Humanities.

The Long Term Exhibition
Compound Yellow
April 6 – May 12
Programming included a screening and discussion of the documentary The Sentence with the director Rudy Valdez, a poetry workshop with PNAP faculty Dr. Tara Betts, and an art-making workshop and teach-in focused on decarceration organized by
SAIC’s Art in Community class and co-sponsored by Chicago Books to Women in Prison.

The Long Term Exhibition
Art on 51st. (Precious Blood Ministries)
February 9 – 28
Programming included a screening of the documentary Stateville Calling co-hosted by Scrappers Film Group, a discussion about the Juvenile Justice Parole Bill, and a conversation with formerly incarcerated folks about long-term sentencing co-sponsored by the American Friends Service Committee & Black and Pink.

The Long Term Print Release Party
In These Times
May 26
Release party for the Long Term print portfolio with readings from The Long Term: Resisting Life Sentences, Working for our Freedom (Haymarket Books). Project support from Dominican University.

Building the Prison to School Pipeline Conversation
In These Times
April 13
A conversation with Danny Murillo, Co-Founder, Underground Scholars, with a welcome from Monica Cosby, Moms United Against Violence and Incarceration. Presented with Education for Liberation Network, Gender and Women’s Studies at University of Illinois Chicago, Master of Arts in Community and Teacher Leaders at Northeastern Illinois University, Moms United Against Violence and Incarceration, Sister Jean Adult High School, and the Chicago Torture Justice Center.

Women Behind Bars Discussion
Pop Up Just Art
November 13
Discussion with of the injustices faced by women behind bars with journalist and author Victoria Law in conversation with Maya Schenwar. Co-sponsored by: UIC Social Justice Initiative; UIC Gender and Women’s Studies; UIC Institute for Research on Race and Prison and Neighborhood Arts Project

Family + Friends Day
Sullivan Galleries, School of the Art Institute of Chicago
October 14
Faculty and friends of PNAP are invited for food, drink and conversation at an exhibition of artwork developed in Andres Hernandez’s spring class at Stateville Prison.

It’s Now Lawndale Community Celebration
May 6 & May 13
A BBQ and celebration of a public mural painted by members of the North Lawndale community and designed by students at Stateville. Featuring music, performances, and art-making.

Freedom Dreams Exhibition
Pop Up Just Art
April 14 – July 14
For this exhibition, Chicago-area artists were commissioned to respond to writing developed by students in PNAP’s Freedom Dreams cultural studies class at Stateville. Programming included a collage workshop with Krista Franklin, a poetry reading with PNAP faculty, and an artist conversation and performance with Eve Ewing, Sherwin Ovid, Fereshteh Toosi, and Damon Locks. Presented with the Social Justice Initiative at the University of Illinois, Chicago with funding from the Propeller Fund.

The Weight of Rage Exhibition
Hyde Park Art Center
January 10 – March 20
PNAP annual exhibition of artworks and writing produced in classes at Stateville. Programming included a walkthrough of the exhibit for families, friends, advocates and allies of incarcerated folks, an interactive poetry performance hosted in partnership with the Poetry Foundation, a listening and response session of archived audio stories with 96 Acres, a panel discussion around the limits and possibilities of current prison and policing reforms, a screening of the films A Place To Stand and The Insiders presented in partnership with the Poetry Foundation, and a letter writing workshop for students.

96 Acres Projections
Cook County Jail
September 11 and 12
PNAP was invited by 96 ACRES to screen an animation made by Damon Locks, Rob Shaw and 11 artists at Stateville on the exterior wall of Cook County Jail.

The Material That Went to Make Me Exhibition
Northeastern Illinois University Library
March 23 – April 3
NEIU Library
Programming included a discussion of cultural production inside of a prison, a roundtable discussion on educational access for people inside and after release from prison, and a screening and discussion of the film Girl Trouble.

The Material That Went To Make Me Exhibition
South Side Community Art Center
November 15 – December 29
Programming included a conversation about prison and and black arts movement with a panel of artists, and a presentation of the First Annual Alternative State of the Illinois Department of Corrections Report.

To Shoot a Kite Exhibition
CUE Foundation (New York, NY)
July 10 – August 2
This exhibition, curated by Yaelle Amir, presents the US penal system from the vantage point of artists, scholars, organizers, and the prisoners themselves, including posters, an animation, and an audio track created in PNAP classes.

Propeller Fund Exhibition
Mana Contemporary
May 24 – July 15
An exhibition of work from Propeller Fund grantees featuring work made during the residency.

Unfinished Business: The Right to Play Exhibition
Jane Addams Hull-House Museum
May 1, 2014 – May 1, 2015
This exhibit explores the history of the social movements that created the first playgrounds, fought for an eight-hour work day, and suggested that time off from work could create a more just world.

Natural Life Film Screening
Jane Addams Hull-House Museum
November 10
A screening of the film Natural Life by Tirtza Even followed by a discussion with Mariame Kaba, Shobha Mahdev and Jill Petty about current issues around juveniles serving life without parole.

Roundtable Discussion and Workshop
Jane Addams Hull-House Museum
November 16
A discussion on social movements and incarceration followed by a workshop in which participants will be asked to imagine budgetary reallocations for the state’s nearly $1.3 billion Department of Corrections 2013 budget based on workshops by Californians United for a Responsible Budget.